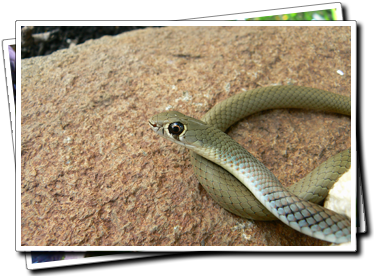 65-70cm, but specimens up to 80cm have been recorded locally.

Swift, fast-moving lizards such as skinks.

Found throughout most suburbs with the exception of the inner city. To the west recorded as close to the city as Toowong and St Lucia.

Frequently seen and commonly enters homes during active foraging efforts. Apparently common due to the high densities of favored skink prey. Will utilise a range of ground localities for refugia including constructed rock and sleeper retaining walls, under rocks, sheets of iron, timber piles and other discarded human litter. Nine individuals were captured under one piece of plastic in a Goodna backyard along side an Eastern Brown Snake. Frequent victim of roaming suburban cats.